Based on the romance written by Raduan Nassar about a Lebanese family living in Brazil’s inland, the movie is a backwards version of the parable of the prodigal son. André is an unattached son, who left family and home due to severe paternal laws and suffocating maternal affection and love. Pedro, his older brother, received from his mother the mission to bring André back home.

The appearance of the brother causes André to remember moments he lived with his family since childhood and the reasons that led him to leave home: rigid and repressive morals of the father and the relationship with an excessive tendering mother. Against his father’s sermons, André celebrates life, sex and freedom. There is also an even dire motive: the incestuous relationship between André and his sister Ana. André agrees to go back home with his brother, but such decision will shake the very foundations of the family.

“The big landscapes have, all of them, a visionary character. The vision depicts the invisible becoming visible… the landscape is invisible because the more we conquer, the more we are lost in it” – (Paul Cézanne)

My motivation in filmmaking is the passage from one state to another. Every instant, preparing the spectator as a painter chooses and mixes its colors, or as a musician, or a shaman gathering its leaves to later extract a set of sensations. We can only move from one state to another if this set of sensations is reached. We only overcome the mere technical construction of a movie if we are capable of generating a dream, with such strength that contaminates the dark of the theater as a plague. It is thus necessary to create a state of violence, transformation, imagination.

But fabulation requires from us one action: to offer ourselves. To march with the courage of belonging to the unknown, to the screen still white. It is necessary to become, free life where it is imprisoned or, at least, embrace this uncertain combat in search of vision, retracing paths, entering our landscape and of others. The resulting fruit of all this need is language. In addition of founding the narrative, language is also the instrument that, with its rigor, disrupts another rigor, the one related to truths once considered irremovable. Language is the same thing as need.

Nowadays, imagination is sentenced to death on a daily basis, as if the exercise of imagining had the same meaning of imposing a way of expression to reality. Imagining causes fear, as it is an act of freedom, transgression, citizenship, in other words, a dangerous act.  Well, cinema, as any other creation, is incomplete, striving to become whole, in search of the perfect moment to place itself, face-to-face, imaginary of both creators and spectators. Thus, filming is imagining to the point of making changes without formulas, models, clichés – first and foremost! Imagining to the point of finding an image that is no longer possible to distinguish the creator from the creation, the actor from the character, the cinema from life itself.

Work with actors
I insisted in the work with land as I believe in imported corporal preparations that force actors to adopt positions without connection with due realities. I wanted a body preparation the Brazilian way. Then, our gestures were provided by rural workers, such as Bernadino and Bastuca, our masters in the field of milking, weeding and harvesting. We were happy.

Composed during shootings by Marco Antônio Guimarães, the soundtrack of Lavoura Arcaica not only perfectly depicts the movie but is also a complete and independent work. The starting point was the Arabian music, recreated with Brazilian and universal elements, with the use of instruments such as cello, oboe and others created by the author of the track, which was released by the record company Trama. 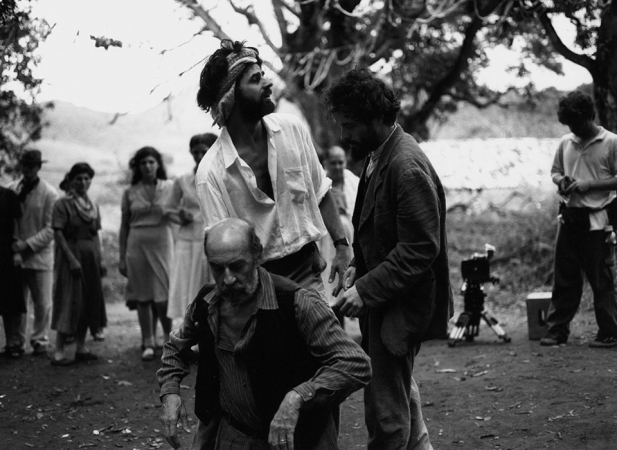 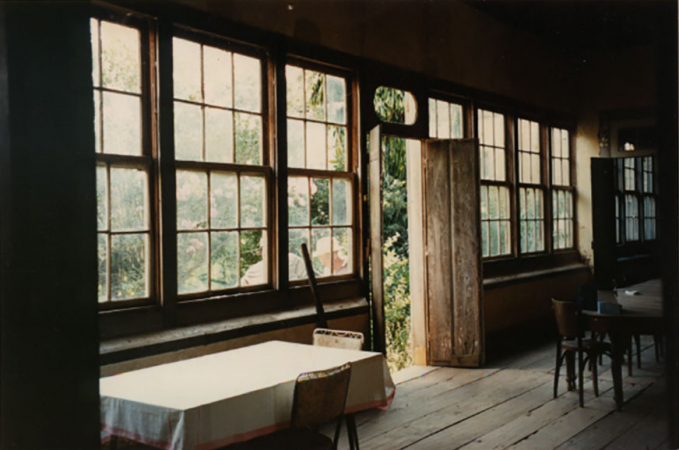 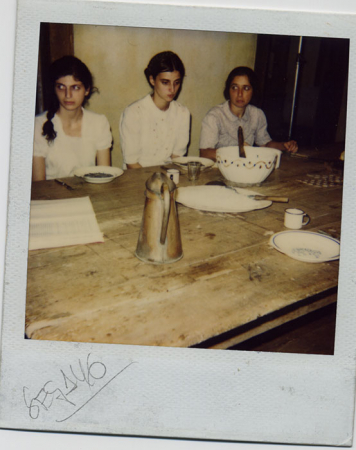 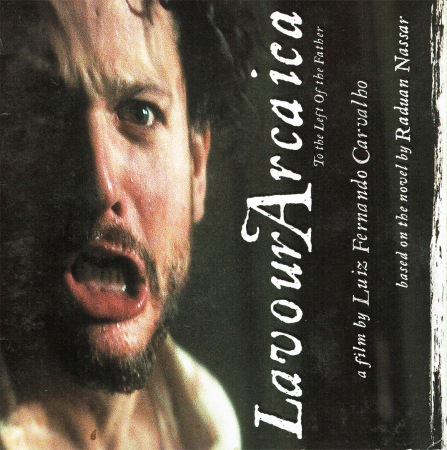 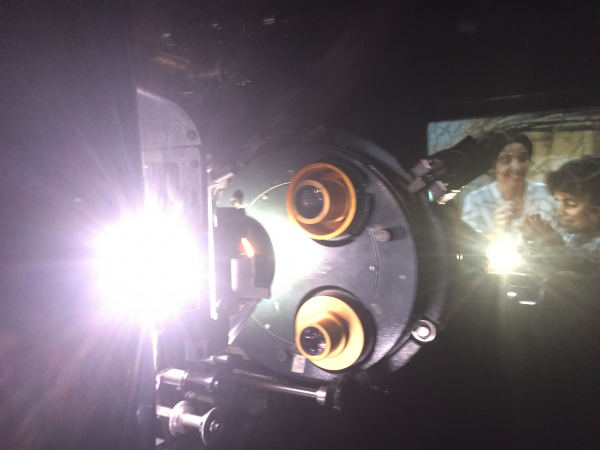 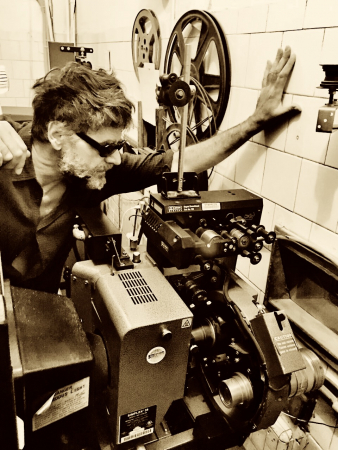 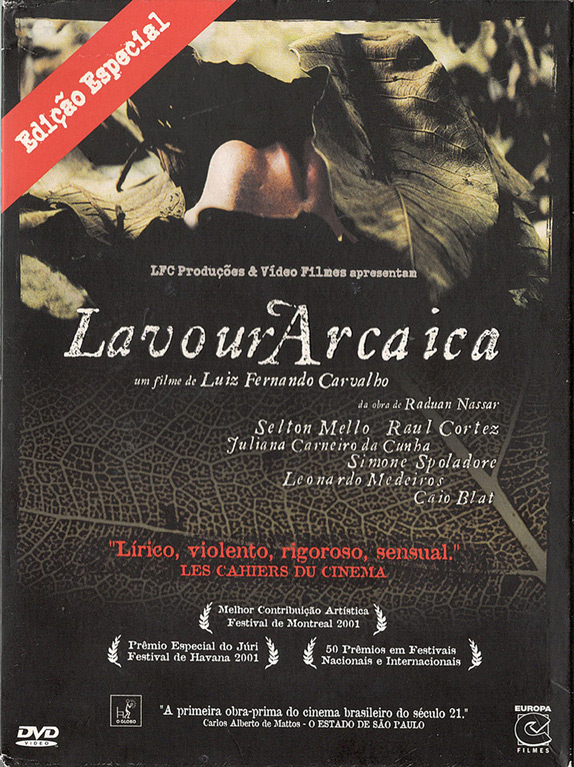 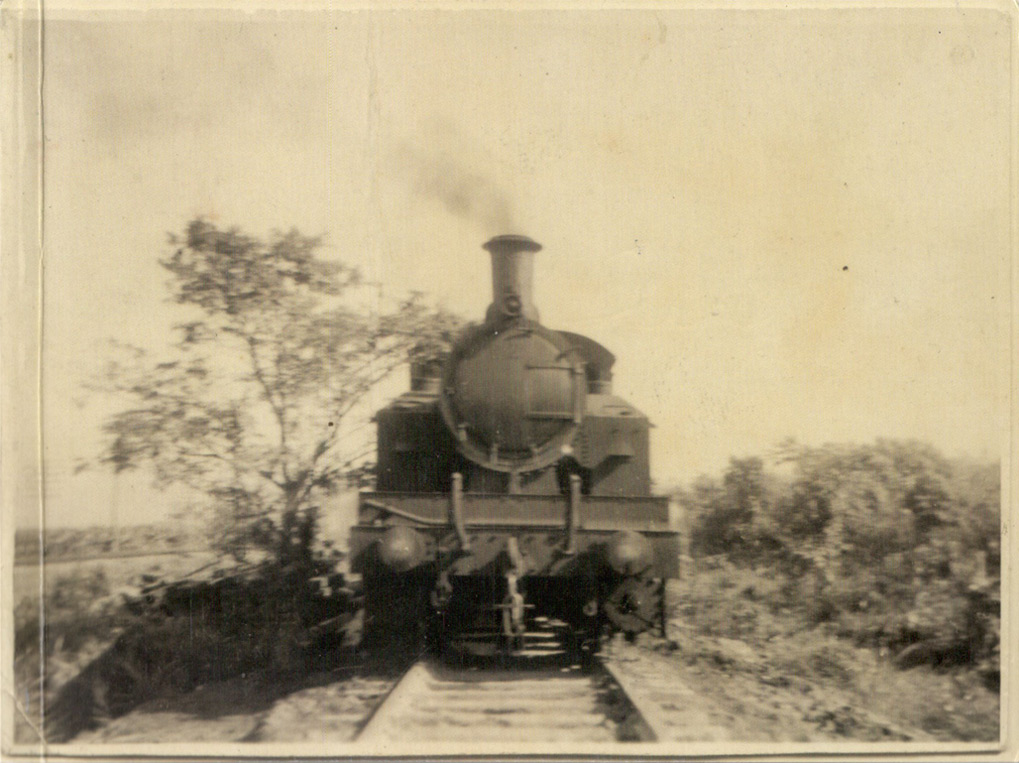 To The Left Of The Father

Rio’s Festival presents the ten best Brazilian films from Retomada (1995) to 2006, in a selection supported by critics and audience, considering the highest box offices. In the book, the reviewer Rodrigo Fonseca writes about Lavoura Arcaica:

The reviewer, essayist and professor José Carlos Avellar sets and analyzes the dialogue between cinema and literature.

Catalogue from the Brazilian Cinema Exhibition Year 2000, 10 Questions, held in Rio de Janeiro and Sao Paolo in 2011. “In this sense, no trajectory in the period seems to be so fascinating and enlightening as the one of Luiz Fernando Carvalho”, he wrote

“No minced words, it is never enough to say Lavoura Arcaica is a masterpiece”.

“The two majestic heroes of the movie are light and shadow, a perfect dialogue between bright and dark, paying tribute to a splendid Brazilian cinema and to a magnificent Brazilian Literature.”

“Luiz Fernando Carvalho made a movie that mesmerizes the eyes and fights against conformism. He is a director with something to say and the courage to take risks. Lavoura Arcaica is a masterpiece.”

“The first major epic in the retaking of the Brazilian cinema.”

“Lavoura Arcaica is an extraordinary work. Much better than I expected, even considering I am already fan of Carvalho.”

The oily salvia of this verb

“The deed of Luiz Fernando Carvalho is indeed remarkable. From a book made of pure fibrous language he managed to take from it a grammar of imagery and speech with an analogous aesthetic effect.”

“This is what remains when it comes to a masterpiece.”

Feature film is an exemplary exception in the Brazilian movie industry

“Luiz Fernando Carvalho spared no efforts. He shoots with all his soul.”

“The first masterpiece of the Brazilian movie industry in the 21st century.”

“The harmony between interpretations, photography and music – broken only, as I see it, in the hyperbolic scene of the chapel and, in a lesser degree, in the parable of the hungry – carves the name of Luiz Fernando Carvalho among the greatest creators of the contemporary audiovisual segment. No minced words, it is never enough to say Lavoura Arcaica is a masterpiece”.

“Let no one wait three hours of entertainment. Whoever seeks a radical experience, however, already knows where to find it.”

Edition 100 – Ranking the best of the culture in eight years

“It deals with cinematographic poetry that makes justice to the romance of Raduan Nassar, which was once considered unshootable.”

From the herd of my father

“We must celebrate and rejoice, newspapers and our chats after leaving the screening room are all discussing aesthetic choices.”

Literary grandeur at the service of the good cinema

“Lavoura Arcaica came with devotion to recover the transcendence in our big screens.”

“Victory for cinema and poetry.”

“A movie too difficult to forget.”

Lavoura and the signs of a masterpiece

“Audience applauded in the end, as if they had heard a symphony from Mahler.”

Poetry of a family tragedy

“Carves the name of Luiz Fernando Carvalho among the greatest creators of the contemporary audiovisual segment.”

“Undoubtedly one of the best movies of the Brazilian cinematography.”

“A scene from Lavoura Arcaica is destined to become history in the Brazilian cinema. It is the one of the reckoning between the father, Raul Cortez, and the prodigal son, Selton Mello.”

“Memorable from the first to the last frame.”

A filmmaker is about to join the poets’ club

“Luiz Fernando Carvalho will soon be part of a club already joined by Walter Lima Jr, Ruy Guerra, Julio Bressane, Paulo César Saraceni and whoever manages to enlarge the limits of life when it is narrated by a movie theater.”

The several faces of love 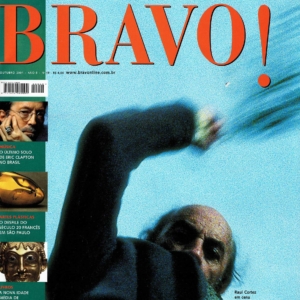 In the image of the father

“It can be said that Luiz Fernando Carvalho filmed what seemed to be impossible: not only a story, but much more than that, the perfect way to do it.”

The lavoura of the artist

“(Luiz Fernando Carvalho) stumbled upon Lavoura Arcaica and read it in a single night.” He found in the book of Raduan Nassar exactly what he wanted: ‘a romance where characters are the result of several times, a mythical, dense and poetic universe’. 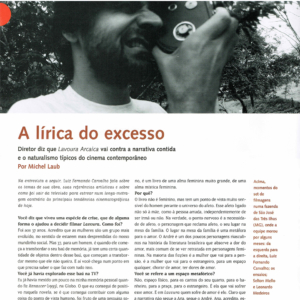 Luiz Fernando Carvalho: “It concerns a text with such a broad level of reflection contained in words. I would have to work with this dialogue between the reflection of words, image of words and image of the cinema.” 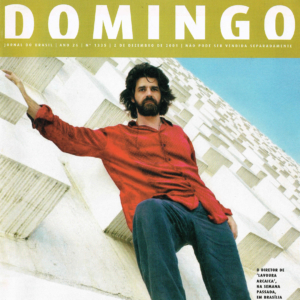 The man behind the lavoura 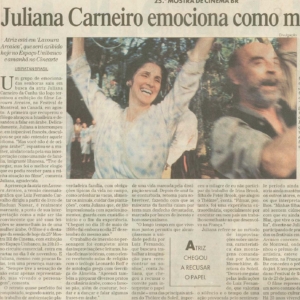 “The presence of the actress in Lavoura Arcaica, the cinematographic version directed by Luiz Fernando Carvalho based on the book of Raduan Nassar is really remarkable.” 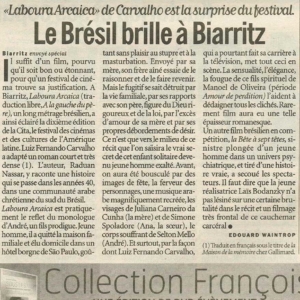 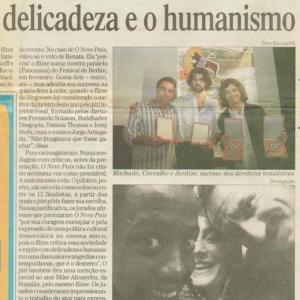 And the award goes to…delicacy and humanism 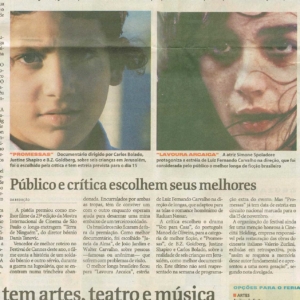 Audience and critics pick their favorites

“The best Brazilian feature film was awarded to Lavoura Arcaica, debut of Luiz Fernando Carvalho as a director, who adapted for the big screen the romance of Raduan Nassar 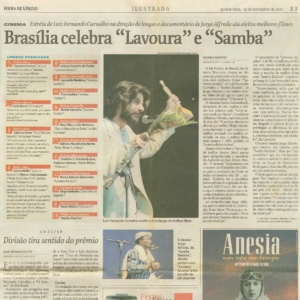 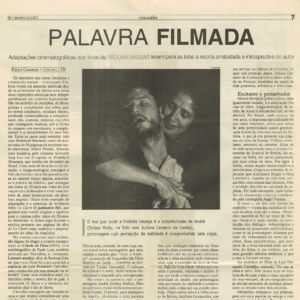 “Luiz Fernando Carvalho finally manages to ally aesthetic rigor to an astonishing safety in constructing a complex and dense story.” 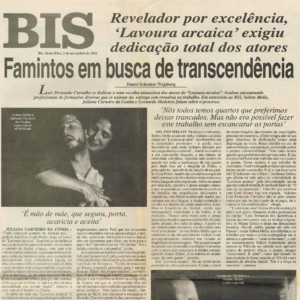 “The affection of the mother in Lavoura Arcaica is revealed by the emphasis given by director Luiz Fernando Carvalho to the hands of Juliana Carneiro da Cunha – especially in the manner how she caresses her son underneath the bed sheet.” 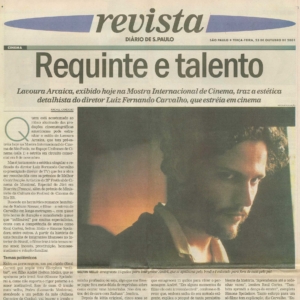 “It is exactly the singular and refined aesthetic of director Luiz Fernando Carvalho (renowned TV director) that makes the work to receive so many awards (…).” 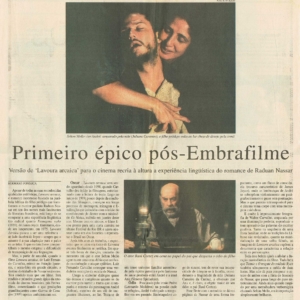 Luiz Fernando Carvalho: “What captures my interest, from the first to the last step, is nothing but touching life. I do not care about the rest.” 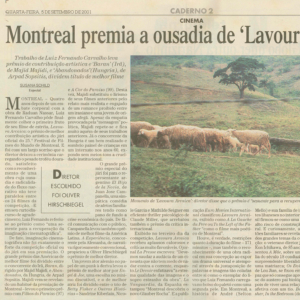 “Work of Luiz Fernando Carvalho gets the award for artistic contribution.”

“The first masterpiece of the Brazilian movie industry in the 21st century will take 52 days to shine before the eyes of the Brazilian audience. With its global released scheduled for Saturday in the Montreal Festival, Lavoura Arcaica already earned a mythological aura due to its long wait (it was filmed in 1998) and opinions from the privileged few that watched it.”

“It was a toilful journey, of nearly four years, in the name of a vital desire: go straight in the direction opposite to the trivialization of the cinema and seek artistic relevance, something nearly extinct in the current scenario. The creative process and results are radical.”

The sinuous trip between television and cinema

“After building a successful career in television, marked by innovation of language, Luiz Fernando Carvalho returns to cinema eager to experiment and discover new paths.”

“If the adaptation of Luiz Fernando Carvalho reaches the soul of the book, this is because Carvalho has not only talent, but also patience. He bent himself, using literature to uncover, piece by piece and during the movie, the soul of his cinema.”

From seed to fruit

“‘A true encounter.’ This is how writer Raduan Nassar and filmmaker Luiz Fernando Carvalho define the relationship created between them during the shooting of Lavoura Arcaica.”

The future that comes before: a reading of Lavoura Arcaica – literature, cinema and unit of senses

From literature to cinema: a study about time in the romance and film of Lavoura Arcaica

Literature and cinema in times of mass culture

Dialogue between literature and cinematography: an analysis of the romance Lavoura Arcaica of Raduan Nassar and its film adaptation by Luiz Fernando Carvalho

Writings and images of the ego: The lyric Lavoura of Raduan Nassar and Luiz Fernando Carvalho

Expressive editing as an object of significance in Lavoura Arcaica, by Luiz Fernando Carvalho

Lavour’Arcaica: Imaginary, Tradition and Conflict in a single Representation

Lavoura Arcaica: analysis of characters in the literature and cinema

From flesh to verb: a study about the work Lavoura Arcaica of Raduan Nassar (1975) from the film directed by Luiz Fernando Carvalho (2001)

Lavoura Arcaica: words and images embroidered in the invisible tissue of time

Conception of visual drawing in Lavoura Arcaica: concepts and meanings

Letter, labor and flesh: rules and concupiscences in the Lavouras of Raduan Nassar and Luiz Fernando Carvalho

Primeval Rhapsody [Lavoura Arcaica] and Dionysus: An interface between the narrative and the myth

The voice of the inanimate. Scenography in the construction of the poetic narrative in Lavoura Arcaica

The Uneasiness and Archaic Tragedy: A Lavoura

Lavoura Arcaica: Suffocated voices in the dialogue between romance and film